The Salvation Army regularly conducts Bazaar (Thrift Store). This Bazaar sells donated clothing, miscellaneous goods, electrical appliances, furniture, books, etc. that are no longer needed by the public, and uses the profit to support those who are in need.

Why don't you donate something that you think "I don't need it anymore, but it's a waste to throw it away ..." to the bazaar?

The Bazaar (Thrift Store) was started in 1969 in Wada, Suginami-ku as a place to support the recovery and independence of those who are addicted to alcohol with the theme of "regeneration of people and things." Currently, there is also a branch office in Kinshicho, Sumida-ku. The work of organizing and selling donations sent by well-meaning people is an important place of employment for those who aim for recovery and independence. From the profit of the sales, support and rehabilitation is provided for those who are recovering from alcohol addiction.

Since its founding at the end of the 19th century, the Salvation Army has been interested in alcohol addiction, which has been a serious social problem, and has taken the initiative in implementing solutions. People suffering from alcohol addiction aim not only to stop drinking but also to become a member of society as a mature and true person. At the bazaar center, the day starts with a morning service, aiming for physical and mental recovery and growth while working with staff who are trying to serve. 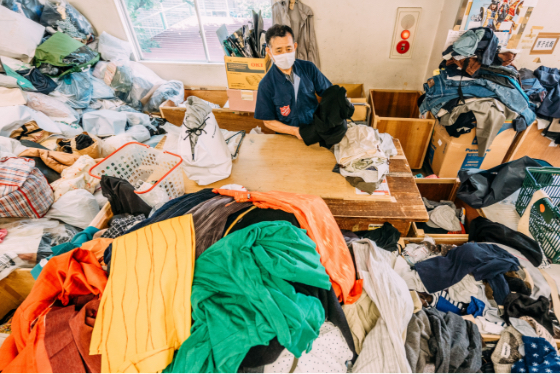 Items donated by many people are collected in the warehouse at the Bazaar (Men’s Social Service Center). We handle variety of items collected from different households, such as clothing, tableware, small items, and books. In this warehouse, staff wear masks and goggles to perform sorting work.

Items organized by category will be displayed at the bazaar venue sales floor. We try to arrange the items carefully so that customers can easily recognize them. A wide variety of products that are neatly arranged in a large venue will be purchased by those who need them and will be useful in their daily lives.

Would you like to donate your goods to the bazaar?

Please contact below regarding the donation of the goods.

* If the phone line is busy and cannot be connected, please call again at another time. * This inquiry system is managed by the Salvation Army Headquarters and we cannot answer specific inquiries about donation of items.