A CONCERT broadcast live on television in Hong Kong raised more than HK$26 million (US$3.3 million) for The Salvation Army’s earthquake and tsunami response programme in Japan. The event was organised by internationally famous film star Jackie Chan and featured artists well known in Hong Kong and around the world.

Hong Kong-born Jackie Chan told entertainment website Hollywood Reporter why he decided to arrange the concert: ‘For years my Japanese fans have made a great effort to raise money for my charity, to build schools in China and to help the victims of the [2008] Sichuan earthquake. It’s time for me to return the favour and do what we can to help.’

He personally paid for the plane tickets and accommodation for all the overseas performers. 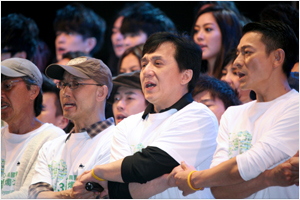 All profits from the concert will be passed on to The Salvation Army. More than 300 Salvationists and Salvation Army staff from its Hong Kong and Macau Command took telephone donations during the event.

The exact use of the funds is still being decided but it is likely that much of the money will be used to supply emergency relief packs – including a 15-day supply of food and water, personal care and hygiene products and blankets – to people in areas affected by the earthquake, tsunami and by problems at the Fukushima Daiichi nuclear power station.